Cretzel with fried eggs and bacon 🥓🍳🥐A br 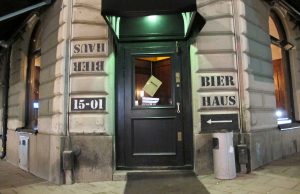 is a great example of a classic German beer house, but with an added surprise…there is more to it than it initially seems.  From the outside it looks like a small bar/eatery, but once you go in you soon realise there is much more.  I would split this into three sections, there is the restaurant part at the front, the pub next to this and then the bar at the back that you can’t see from the outside.

In classic German beer house style, the seating is all communal in essence with long tables and benches.  The internal design is in a very dark wood, which makes it look quite classic, but also rustic with the areas of varnish that are quite worn.  It also has high ceilings and some steampunk-Esq chandeliers which make you question what style the place really has, but somehow it works.  The back area has a slightly industrial, concrete feel to it, but in a way that is inviting and a little artsy.  This area also has its own bar, so worth checking to see if it is open if there is a queue at the front bar.

This is one of those places that has unisex toilets, but, thankfully, they are separated into individual entrance cubicles.

As you would expect, they have a good selection of beers and servers are knowledgeable.  The prices are slightly more than average for the city, but this is down to the imported selection on offer, and there is no happy hour that I know of.

The food looks good, but I will hold judgement until I have tried it.  Keep an eye out for an update on this front.

I feel there is more to see and try here, so I will be going back…you should give it a try too.