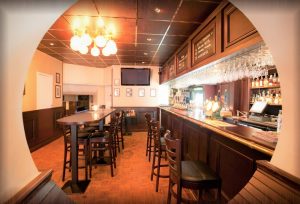 The Flying Horse is a nice pub on Odengatan.  It has seating outside the front and upon entering it is very clean-cut looking and neatly designed  Certainly more of a bar feel than a pub.  A very low-key and casual bar.  Nothing fancy.  It appears relatively small but with adequate seating, however, head to the back and there are stairs leading into a much larger space with an abundance of seating and a large bar.  This downstairs area is the ‘restaurant’, although they seem happy enough for guests who are just drinking to sit there too.  This space is not always open and the bar down there does seem to close quite early, but it is good to know about this area if you are in a large group or if the pub is full.

The staff serve their purpose.  I wouldn’t go as far as to give them any niceties, but they do their job and they aren’t rude, so no complaints from me.

They have a pretty good selection of drinks.  They claim to offer over 80 different kinds of beer, including 19 different draft beer and more than 120 single malt whiskeys.  The food I am yet to try, but the menu looks like exactly what you would expect to get at an American sports bar.  And as much as I hate myself for being this presumptuous, but it does look like a menu that mainly consists of frozen and prepackaged items.  Although, to be fair to them, after a few drinks who cares.

Their price point for drinks is perfectly average for Stockholm, but they do have a small Happy Hour that runs until 7pm Monday – Friday with a beer at 39kr.  The price of the food, however, seems to be much more reasonable than a lot of pubs in Stockholm.

I really like this place and often frequent it during the week and at the weekend.  It is really relaxed, never that busy and therefore easy to find a seat.  It isn’t too loud, so good if you want to sit and chat.  It’s not an exciting place, so maybe not a drinking destination before you go out dancing, but for after-work beers, it is spot on.