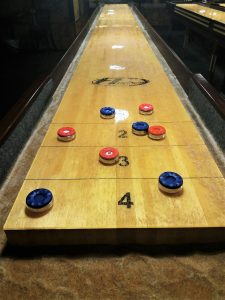 Biljardpalatset is a huge, three-floor games hall on Kungsholmen.  If you are looking for something fun to do in Stockholm you should definitely consider coming here.  Having opened back in 1963 is has changed over the years to include a wider variety of entertainment options.  There you will find pool tables, darts, a small arcade and the very popular, Shuffleboard amongst other games.  Shuffleboard is a big deal in Sweden unlike I have ever known in another country.  In fact, I had never even seen a Shuffleboard before coming to Stockholm.

If you are new to Sweden I would recommend giving Shuffleboard a go.  The rules are simple and it is actually quite fun – even if it doesn’t look like it initially.  As a brief overview of the rules – you have two teams (either two or four people total) and each team has four pucks.  Both teams stand on the same end of the Shuffleboard and take turns sliding their pucks to the other end where you have the scoring area.  Only one team can win per round and it is the team with the puck (or pucks) closest to the end of the table score points.  You tally up your points as you go and the first to 15 wins the round.  Easy right!

Biljardpalatset has so much space and so many options you could easily spend hours playing your way through the different games.  As they have so much space you are almost guaranteed to find some game available even if it is on their busy nights.  When you enter the building there is the ‘reception’ on the right-hand side and here you let the person working there know what you want to play, you hand over ID and they give you the tools you need to play your chosen game and tell you where to go.  When you are finished you take these back to the reception and that is when you pay as it is based on the amount of time.  Simple.

They have two bars, one on the ground floor and the other on the bottom floor (the second and third floors are underground) with a decent selection of drinks and you can put these on to your tab if you like.  They do also serve food, although I am yet to try this, so can’t make a judgement.

Pricewise it is all very fair and they do have them listed on their site which you can see here.  This place is highly recommended if you are looking for somewhere to play games in Stockholm

To see other fun things to do in Stockholm click here