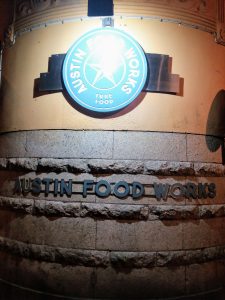 is a restaurant (or rather restaurants as they have just opened the doors to their second venue in Kungsholmen) offering food inspired by the deep south of the United States.  Open for lunch, dinner and a monthly brunch, their menus are varied with plenty of options.

We went on a Friday evening and it was buzzing and lively until late.  We were politely greeted upon arrival and taken to our table.  Our server arrived soon after for a drinks order and these were swiftly delivered.  He was polite and efficient, unintrusive but there as soon as we needed something.

The place has a country vibe with a lot of unvarnished wood, metal and mason jars.  I was in love as soon as I walked in.  It is cool but cosy.

The cocktail list is heavy on tequila and bourbon, which is to be expected.  We started with a couple of classic margaritas and followed this with a range of their bourbon offerings.  All were delicious and never took too long to make.  We were even impressed with their ‘Bourbon n’ bubbles’  which we weren’t sure about when we read it on the menu.

For starters we went for their Hot n’ sticky chipotle chicken wings served with a blue cheese sauce.  Delicious!  A nice amount of both spice and sweet and the dipping sauce was perfect.  For mains we opted for the Chicken n’ waffles and the All in BBQ.  The Chicken n’ waffles is a really tasty dish.  The chicken was crisp and well cooked, the foie gras butter was as delicious as it sounds and the waffle was chunky and light.  The All in BBQ included a sample of each of their smoked meats – brisket, pork, sausage and chicken.  The flavour on each was really great.  Just the right amount of smoke to give it a true BBQ flavour but not overwhelming.  The only complaint from this was the brisket which was unfortunately very dry, although with the other meats all being so tender and juicy it is hard to imagine it usually being as lacklustre as it was.

Their price point is a bit above what I would expect it to be for the type of food they serve, but that being said it is worth it.  I will give their brisket the benefit of the doubt, put aside my peeve of their numerous menu typos and mistakes (seriously!) and highly recommend this place.  I know I will be back and will be testing out their new venue too.